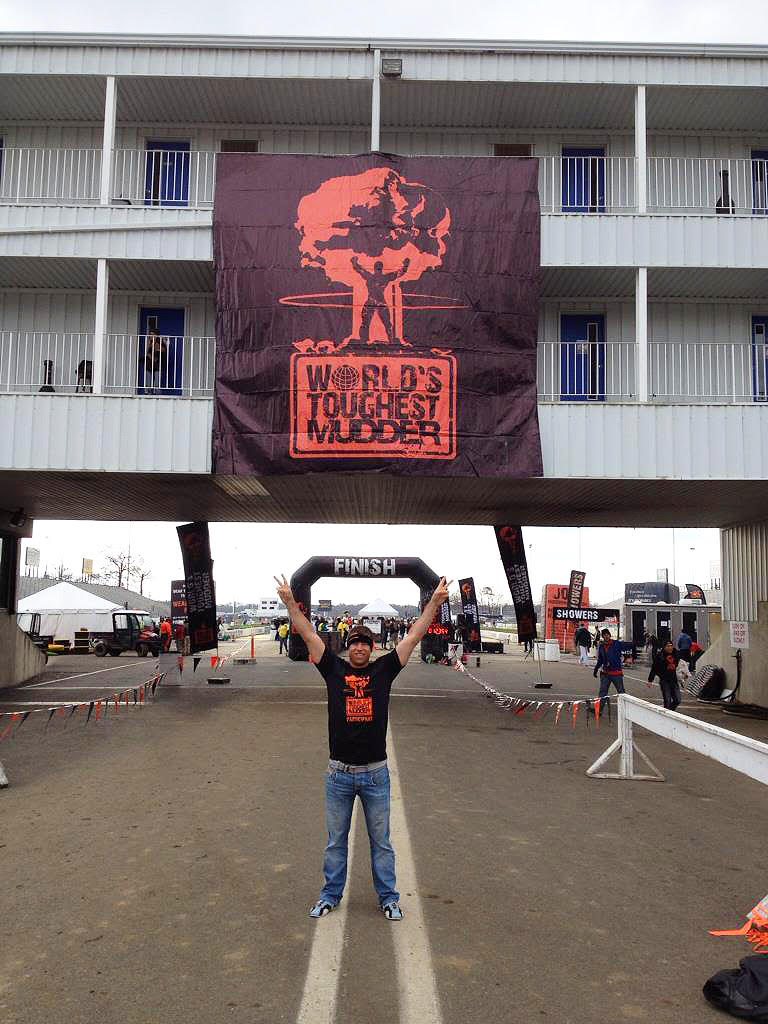 It’s quite appropriate that I’m writing this on a bus from Bogota to San Gil with the aircon pumping and me freezing my ass off in my shorts!!

So where do you begin….WTM is a qualifying event. There are 450,000 people who participated in a Tough Mudder event in 2012. The top 5% from each event qualify for the WTM. My mates and I did the event in the UK in May just for a laugh…we thought that coming 2nd in the Dress Up competition dressed as Red Indian Warriors was the highlight especially because of the cool sunnies and watches we got as prizes!!! These events are usually 8-13miles with about 25-40 different obstacles. The events are not timed as they are more done in the spirit of camaraderie and team work, you can if you want submit your time after the race and then wait to find out if you qualify for the WTM. Big Al, L-Train, Rennie and China from the Muccka Mad Boys qualified as a team to our surprise!!!!

Unfortunately Big Al and L-Train couldn’t convince their wives it was a good idea even with a little trip to NYC thrown in there??!! Rennie had just returned to the States after spending a year in Spain finishing off his studies so needed to find a job

Even though qualifying as a team you could still enter WTM as an individual so I decided it was the next challenge both physically and mentally I wanted to put myself through.

My training consisted of a 2 month slightly lower mileage Comrades training plan combined with a 4 week Kris Gethin DTP program to strengthen the muscles and mind. Oh and of course 5 weeks of tapering and partying in South Africa, I needed to get all the practise in for being sleep deprived!!!

WTM is held in New Jersey in November where the temperatures reach freezing at night. It is a 24 hour event, each lap is 10 miles (add on 1/2 mile each lap for penalties of obstacles not completed 100% – of which I had to do every lap!) and there are 32 obstacles per lap. Most obstacles involve water or mud, two of them being 200m swims in freezing water!!! So unless you are stark-farken looney you need to do the whole race in a wetsuit, 99% of people do! The winner of the race is whoever finishes the most laps in 24 hours, although you are able to start your last lap within the 24 and finish that lap after the 24 hours

The race is seriously well organised. It was held at a race track but most of it is actually around the track in the bush!! You have you normal registration and life waiver signing and then you enter the pit where everyone sets up their tents and equipment

Half an hour before the race begins everyone lines up at the Start line for a few final instructions and some final war-cries and motivational fist pumping stuff by the race MC. It’s 10am about 8 degrees and the 1300 or so who made it (over 2000 entered but obviously pulled out) begin. At the time I didn’t know what my strategy was but I knew I wanted to do 3 or 4 laps.

Running in a wetsuit is NOT easy!!!
I planned to run a little and walk a little on lap 1 to see how it went. You meet awesome people along the way, most of the guys doing it were American, there were only 6 countries represented, pretty much everyone I spoke to was in the Army or had been in the Army and all done their time serving in either Iraq or Afghanistan!! Pretty hard core bunch 🙂

My first lap was pretty slow but perfect to conserve energy. It was also warmish as the sun was out so you could still keep warm with going slowly! At the end of each lap you have a medical assessment to see if you are still healthy enough to carry on. You’re also given an arm band to show how many laps you’ve completed.

Pretty much everyone pits after each lap which means you go back to your tent have a little rest and get some food on board as you’re easily burning 2500-3000 calories per lap!!!

My second lap was a complete dawdle as I think it was pretty much a fast walk the whole way! Met some cool yanks and Aussies and chatted to them the whole way! There were food stations and first aid stations in three spots around the course. Food consisted of carb type sweets, bananas and water.

I pitted around 6:30 in the dark and had a little rest with some refuelling too!! At this point the temp had dropped to zero so was friggen cold. I wasn’t looking forward to any of the water obstacles. At this stage your waterproof gloves and socks are completely soaked, your body is also cold and wet as water somehow manages to get into the wetsuits. So your core body temp drops hectically too! I knew this was the lap which I needed to up the pace to keep the blood flowing and avoid getting too cold. I pitted for about 25 mins, picked up my head torch and swimming cap (which was my saviour!!!). I ran the first half of the lap with an Aussie bloke I befriended and then had to move on (although he did end up coming 11th but nearly killed himself in the process!). The field had completely thinned out with most people resting for the evening if they hadn’t pulled out already and gone home!!! The food stations now had hot chicken broth and little heaters to help warm everyone up. Broth was often poured over shoes and wetsuits for an instant heat hit!!! I couldn’t feel my left foot the whole lap cause it was partially numb and frozen. Not a good sign. I must say that I felt strong on lap 3 as I had conserved my energy in the first two laps but the cold was an absolutely killer!!! This is where the mind games started to kick in, I was going through different emotions and thoughts mostly about how cold I was and if I had another lap in me or not before taking a nap. Swimming in the pitch black and freezing cold towards the end of the lap certainly mad that answer easier!!!! My shivering had only just begun…..

I think I pulled in to the end of lap three just before 10pm, great only halfway!! They had hot showers at the finish line….I took my full 3 minute allocation to try and warm up and also get some of the mud off me!!! It was like heaven although coming out of that hot shower into the freezing air still in your wetsuit which is now completely wet is not the greatest feeling. After that I went to the first aid tent which had three or four little heaters pumping and plenty of guys sitting around them wrapped in their space blankets and drinking broth or hot chocolate!!! I opted to join them and have some hot chocolate and try get some warmth and feeling back into my body which was slowly starting to shut down and shiver to death!! After about 30mins we were all kicked out of the tent as they only wanted genuinely injured or suffering people in there!! It was a good 30mins swapping wars stories and tactics with the others who were also still going. The most common theme was that taking a piss in your wetsuit was one of the most satisfying moments as it was like being in a hot bath and if you were lucky it would filter out and down to your feet and warm them a little too!!!

I was sitting on the edge of what to do…one more lap or try have a nap??!!

My tent was half way down the pit lane which was about 750m, I reckon about half the tents had disappeared as competitors had left and called it quits. By the time I had walked to my tent and spent 20mins refuelling I was a shivering wreck, everything outside had frosted over too so I decided to pack it in for the night, get warm (HAHA), and catch a few hours sleep (HAHA – AGAIN!) before possibly attempting another lap or two in the morning! I managed to get out of my wetsuit, dry my body off and put on my running tights and long sleeve top and then get into my sleeping bag. I should have just bought a sheet the sleeping bag was soooo thin!! I have NEVER EVER been so cold in my life. I tried to fall asleep but started shivering uncontrollably!!! I chucked on my jeans, three pairs of socks, another two t-shirts and a super warm jacket!! I couldn’t warm up though and still carried on shivering like there was no tomorrow…I started to think like that too…! So it was impossible to sleep because the pit area is fully lit up, has music pumping all night and also every 20min you have an official knock on your tent and say your name to see that you are ok and not suffering from hypothermia!! It’s annoying but in hindsight is the right thing to do. I honestly never slept a wink and thought that this might be the last night of me on this planet. It’s amazing how the mind starts playing games!!! I just knew that the body is a strong piece of equipment and to try ignore what it was being told. Eventually at 5am I decide enough was enough and that I was either gonna call it quits or try go for one more lap!! I reached for my wetsuit and it was COMPLETELY frozen!! Oh no…that threw a spanner in the works. I decided to lie down again…at 6am I decided to man up!!! Put on the frozen wetsuit which was one of the toughest things mentally I’ve ever done…I don’t like the cold very much – LOL!! I had to change my socks so put on 1 pair, then tied a plastic bag over, put on another pair and tied a plastic bag over them too!! They were only ankle socks but still meant it was a squeeze to get them into my shoes!! Eventually at 6:30 I got going. I did the whole lap by myself and didn’t known if I was going to make it at certain points. The wind had picked up too so it felt like minus 500 degrees!!

I eventually crossed the finish line just after 10am. I took the longest hot shower ever and savoured every moment, even though it was onto my wetsuit and not skin, now that would have been bliss!!

I’m glad I competed and finished around 270th which is not bad and I’m fairly happy with it. In hindsight  I should have tried to pump out lap 4 that evening but realistically it could have pushed me over the edge….so I’m content and learnt some valuable lessons both physically and mentally which I will use for the next challenge whatever that might be in the workplace, socially or at sport.